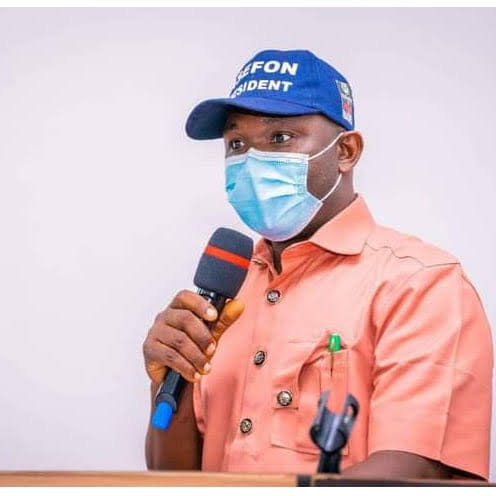 The National Association of Nigerian Students, (NANS), has berated Buhari-led administration over the budgetary provision for education in 2021, describing it as the worst in the last ten years in the country.

NANS President, Comrade Sunday Asefon said this in Ado-Ekiti, on Thursday, during a courtesy visit to the office of the Nigeria Union of Journalists, Correspondents’ Chapel, Ekiti chapter.

Disturbed by the neglect of the education sector, which was apportioned with a paltry of 5.6 percent in the 2021 budget and the high level of insecurity in the country, NANS has planned to organise a Security and Education Summit to partner stakeholders on how to arrest the drift in the two critical sectors

He said: “I condemn totally, the federal government’s 2021 budgetary provision to education. It was the worst in the last 10 years. The FG only apportioned 5.6 percent to the sector out of a total of N13.6 trillion budgetary provision.

“When you remove the percentage for basic education, what then becomes of the tertiary cadre? The percentage was ridiculous, low and disappointing . This is one of the challenges we are facing in the education sector”.

Asefon assured that the NANS under him would invest quality time to advocate for better funding of education sector, saying the sector has been neglected because only the children of the poor attend public universities.

On the spate of insecurity in the land, Asefon described as shocking, the kidnap of over 300 boarding students of the government College, Kankara, Katsina State by gunmen, saying this had attested to the utter failure of governance in the country.

“I was shocked by this incident and I urge the federal government to do something urgent about this. When I was told that the Kankara students were kidnapped with motorbikes, I was not really happy. It shows we don’t have security around our campuses. Our students were being bullied and harassed by bandits across the North, that we won’t tolerate.

“Nigeria is richly blessed. If you look at our budget, several billions of naira were being budgeted to security sector. In spite of this, we are not secured. With the way things are today, Nigeria is sitting on a keg of gunpowder.

“I think we can borrow a leaf from Singapore. Singapore had a lot of challenges like ours in the past, but it overcame with proper planning. Nigeria should take a leaf from this country.

“We are worried that our Education and Security have deteriorated due to government lapses. They have collapsed and Nigeria needs urgent overhauling.

“NANS under my headship will organise education and security summit, where we can address the deficiencies in the these two sectors.”

Asefon said his leadership of NANS will tackle the malaise of sex for marks, unlawful rustication and other forms of injustices on campuses.

He also warned the government and Academic Staff Union of Universities (ASUU), not to renege on the pact leading to suspension of over nine months industrial action in the universities.

“The government and ASUU must honour their own side of the agreement . We are particularly worried that ASUU, whose members are supposed to be socialists are turning capitalists. They no longer put their children in the public schools and also not dedicated to duty.

“ASUU should not consider another strike. A lot of students had died, some had taken into ICT fraud and won’t come back to schools. Was the government and ASUU not aware that 75 percent of those that participated in EndSARS protests were students? They constituted about 41 million population of Nigeria.”

The NANS President called for total overhauling of the education and security sectors to be able to deliver for Nigerians.

Asefon stated that the election that brought him into office was keenly contested, which he said further put a burden on him to be focused in his service to the students, by executing transformational agenda that would reform and rebrand NANS.